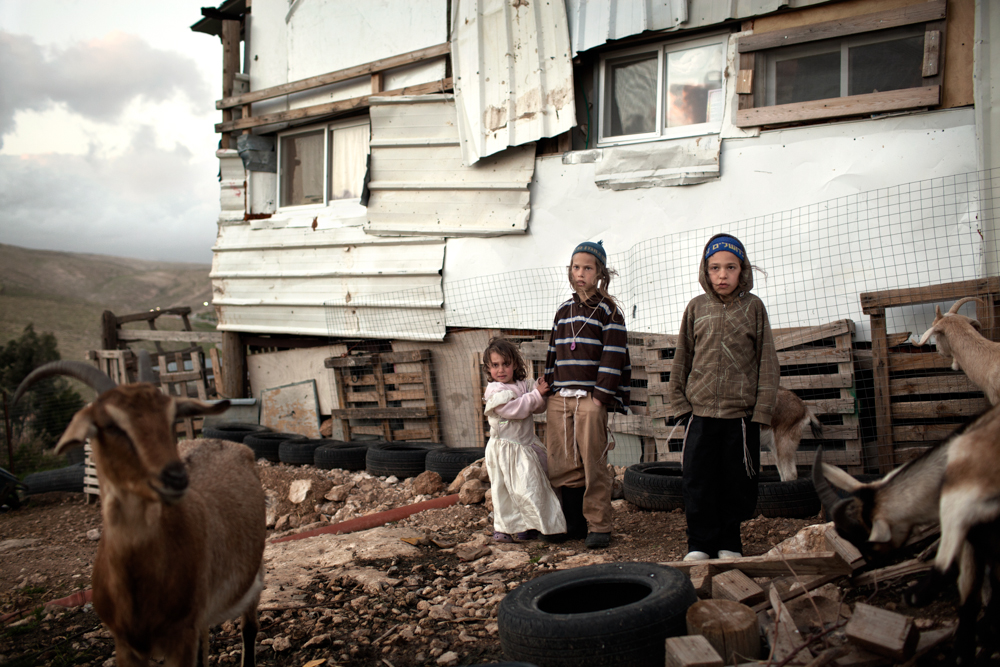 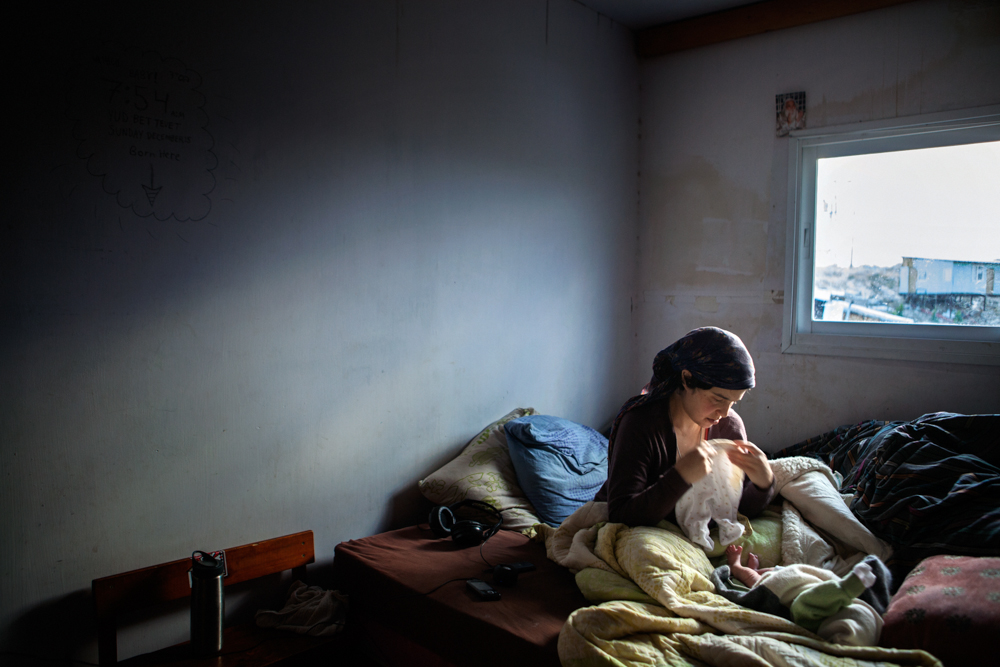 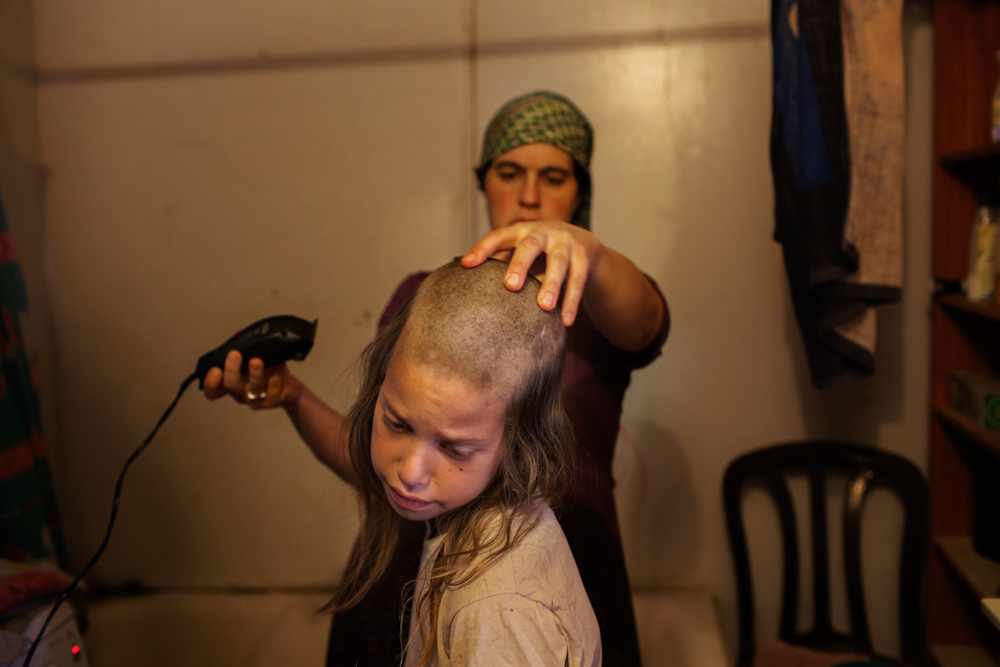 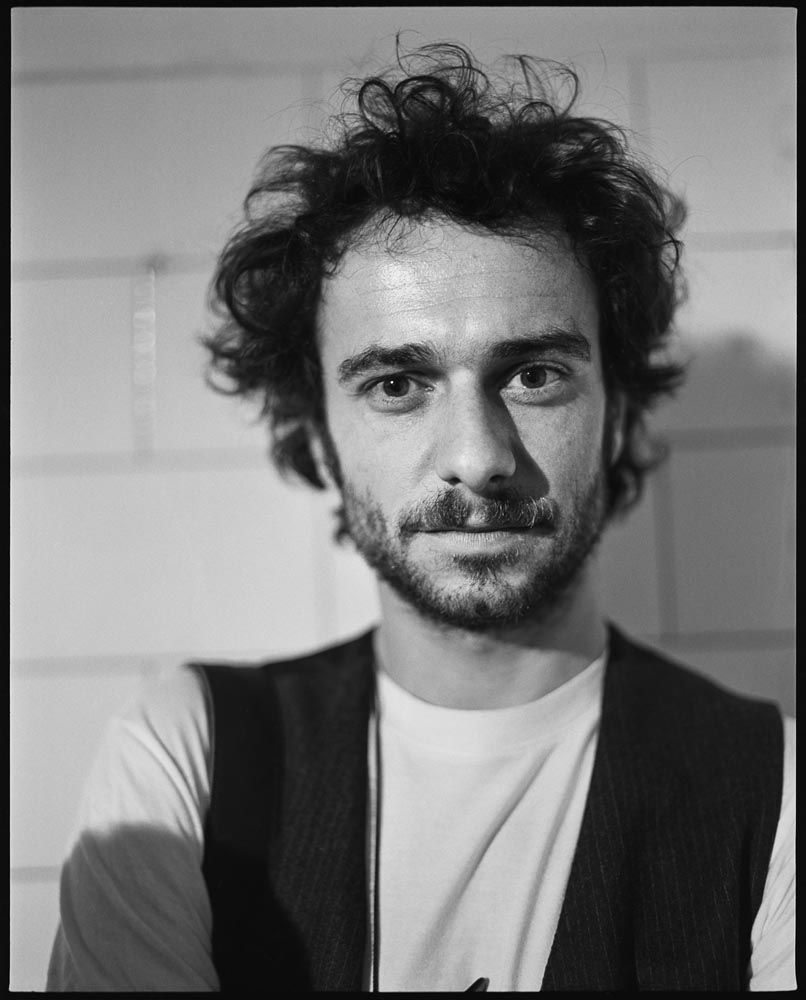 The entrance gate of the illegal settlement in Mitzpe Hagit is precarious as the small Jewish post itself: ten small houses and prefabs aimlessly put on one of the arid hills that gently descende from Jerusalem to the Jordan Valley. Today 350.000 Israeli colonists live in West Bank, even though their stay in this land is considered illegal by the United Nations, the International Court of Justice and the Fourth Geneva Convention. In this border land life is cheap, and here Gedalia Goldburt decided to move with his wife Shira and their seven children, to achieve their dream of a simple and religious life, free from conflicts and far from consumerism and the frenzy of the city. Gedalia, the head of the family, is an American Jew who, at the age of 23, moved from Ohio to Israel, looking for a better life, and here he received his “enlightment”, joining the Na-Nach movement, a Jewish ultra-ortodox cult born in the ‘70s, whose members are famous for their street dances with religiously-revisited techno music. After his wedding with Shira, an American Jew too who had moved with her family from New York, they have been living in different places, looking for the right one where to start a farm and finally choosing West Bank, where, since 1967, the Israeli government has supported the resettlement of its civilian population with any kind of incentive (discounted houses and utilities, free transports and schools, and, of course, the safety guaranteed by the army). Godlburts’ life flows slowly and insecure, splitted between prayers, meditation and small daily duties. Gedalia takes care if his few goats and his home, reinforcing it with metal plates, tyres and wood pieces collected all around; sometimes he goes to Jerusalem to dance in the streets, begging for money to provide his family’s keep. Meanwhile Shira attends housekeeping and children’s education, because none of them goes to school, so they spend most of the day hanging around in the desolate landscape surrounding their house. Gedalia and Shira conform to the Zionist Colonialism of the early Nineteenth century: they found their promised land, pretending to live in peace in one of the most troubled areas of the planet, where “peace” is just a word which can’t be a reality anymore.

Pietro Masturzo (Naples, 1980) is an Italian documentary photographer and photo reporter based in Milan. His work focuses on socio-political issues, with a particular interest in the resistance of peoples in the face of oppression and the violation of human rights. Pietro studied International Relations before dedicating himself to photography, and has worked in Italy, Georgia, Iran, Myanmar, the Democratic Republic of the Congo, Egypt, Libya, Israel, the West Bank and the Gaza Strip, documenting the human stories in situations of conflict, even when covering major news events. In 2010, he was awarded World Press Photo Picture of the Year for his work in Iran. Pietro has been widely published, including in L’Espresso, La Stampa, Il Corriere della Sera, Internazionale, The New Yorker, The Financial Times, Le Monde, Stern, Geo, Marie Claire, Vanity Fair, The New Republic, and many others. He works regularly with Italian and international publications, festivals, organisations and non- government organisations.